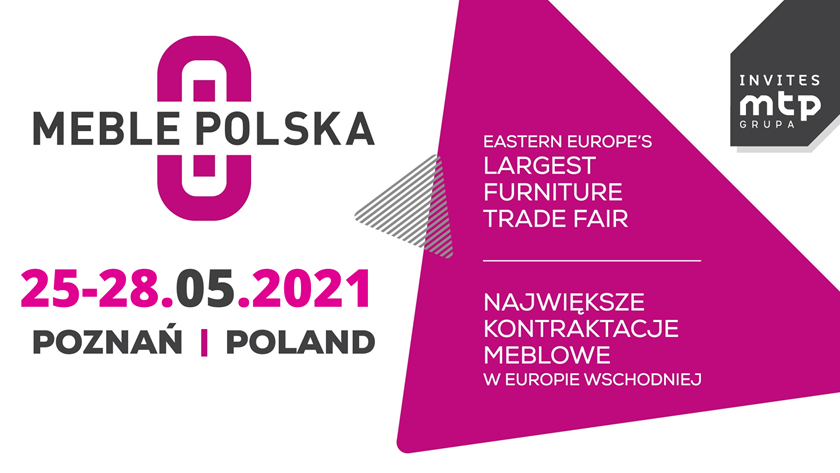 Due to the current epidemic situation and predictions concerning the course of the pandemic in the coming months, the Board of Directors of Grupa MTP decided to postpone most of the events organized on the grounds of MTP Poznan Expo in the first half of 2021. This change also applies to the MEBLE POLSKA and HOME DÉCOR trade fairs block. The fair planned for February will be held from 25th to 28th May 2021.

The changes are to provide participants with the greatest possible benefits from participation in the fair. - There was a significant risk that a large group of foreign buyers would not be able to come to Poznań in February due to various restrictions. After consultation with a group of the largest exhibitors and representatives of selected buyers groups, we came to the conclusion that the optimum date for the fair will be May. This is a temporary return to the old date when the furniture fair in Poznan was held. However, we hope that next editions can be organized again at the beginning of the year - says Józef Szyszka, director of MEBLE POLSKA Trade Fair. - We have received signals that May is also beneficial for the interior design industry - adds Kinga Dobrowolska-Baczkun, HOME DECOR Trade Fair Director.

Until the end of October the interest in participating in next year's fair was expressed by the vast majority of the previous MEBLE POLSKA exhibitors. Participation in next year's edition was also confirmed by a large group of exhibitors at HOME DECOR. The next edition of the ARENA DESIGN event, due to the nature of the event and its targeting, among others, such groups of recipients as students, design enthusiasts or the general public, will take place only in 2022.